If you haven’t already, you can pre-order your copy of Issue 33 of Rock n Roll Bride here. Due to the quarantine these won’t be sold in stores, so we highly suggest pre-ordering your copy today, these puppies sell out fast!

Mitch and I came up with this idea in early February of this year, walking around the streets of downtown Palm Springs while on a short trip to find what would be our new home out West. It was a short, happenstance thing we came up with in between tiki bars, and little did we know that this was a world just a few weeks shy of a global pandemic.

We soon after moved across the country with all our stuff in tow, but we moved to a very different world. Everything was shut down, aside from the local Walmart and Stater Brothers, and our world grew quite small as we watched everything get worse and worse. We took the time to nest; a much needed respite from our previously non-stop lives. And as we finished this styled shoot, it took on an entirely different meaning. It wasn’t just about the metamorphosis of Springtime anymore – it was about growing from the ashes, a drastic shift in styles of weddings, and a whole new meaning of what it is to be a bride.

The New Era of Weddings

The global shutdown has caused a lot of peoples’ plans to change, but it has not impeded people from loving one another. We’ve watched countless fearless couples postpone their weddings, or cancel entirely in order to elope instead. This new COVID Couple is stripped down, minimalistic, gone away with the gaudy and extravagant in exchange for something simple yet undeniable. That something is unity. Being with one another, despite the odds. We see so many similarities with this minimalist bride styled shoot and the new world of weddings, and we are beyond grateful to Rock n Roll Bride for seeing something in it too.

(Side note: the night I sent it to Rock n’ Roll Bride for a possible feature on their website, I said to Mitch, “I really feel like the next thing for us is to get featured in print,” and the next morning we woke up to just that. It’s weird how the world works sometimes.)

We came up with the idea to create a Spring Butterfly Bride after seeing a post on @gwsinsider asking for unique veil photos. It just so happened that we had recently also seen a lovely cathedral-length veil where flowers had been hand-sewn in. It got us thinking… what if we did something really natural and earthy, like incorporating moss and butterflies?

Natural Crown & Veil: How We Made It

So, that same day we jumped on Etsy and ordered 2 quarts of live moss, 25 taxidermy butterflies, 2 luna moths and a whole mess of hot glue. We had a large piece of tulle left from our Midsommer Styled Shoot we created last year. It just so happened to be the perfect length for the cathedral, over-the-head, natural veil style we had envisioned.

To create a truly unique, natural crown, we decided to hand-make it ourselves. We bought a long strand of grapevine garland from Michael’s that is originally meant for a DIY wreath. We trimmed it down to size, using floral wire to hold it together. Then we added a ton of live moss (which really added to the earthiness we wanted), a white crystal, and a beautiful Luna moth to the side of the crown.

We realized pretty quickly that we were going to have issues getting the butterflies on the veil before it was on our model Gabi. To solve that, we ended up attaching them minutes before the shoot while the veil was already on her. That helped give the veil a super natural, realistic look, and made the butterflies really pop. At first the crown was there to hold the veil in place since Gabi is sporting a really rad buzz cut at the moment. But, it ended up becoming the centerpiece by the end of the shoot and we couldn’t be happier with the result!

A Note for the DIY-ers

Before you break out the hot glue and get started, there are some extra things you should know. The butterflies are extremely delicate! So in order to spread their wings apart and safely affix them to the crown and veil, they will need to be rehydrated. Good news is it’s super easy to do, and this video is really helpful with learning how to do it! But take note: it will take somewhere between 12 and 24 hours for them to rehydrate fully. Also, the moth crystals that you’ll need smell reeeaaaalllly awful, just FYI.

We specifically chose not to include a bridal gown, and opted instead for a neutral leotard. This shoot was solely about the veil and crown, and we thought anything else would simply take away from that.

Gabi is an awesome person who has modeled for Mitch in the past, and so she immediately came to mind. One reason we really loved the idea of working with Gabi (aside from her being incredibly sweet and amazing to work with) was her hair cut. It’s not very often that we see brides with really short hair, and we wanted to change that. For us, representing all kinds of couples has been a really important part of our work. So being able to work with such a beautiful person and also being able to incorporate less-represented, “alternative” types of brides was an extra win!

Savanna also played makeup artist, using an assortment of Glossier products to create a soft, shimmery, fairy-esque glow. Particularly, she used boy brow in brown, brow flick in brown, lash stick, haloscope in opalescent glaze, lidstar in moon, and glitter gelée which unfortunately is no longer available, but for a good, environmentally friendly reason. Natural beauty was the name of the game here, so we really couldn’t have achieved this without Glossier’s help.

We chose to shoot this in a studio, as we couldn’t see this going any other way than an editorial style. Playing with light and different backdrops was a big part of this shoot. Oftentimes, we had 2-4 different colors of light in the frame at once. We chose a light blue backdrop opposed to a neutral one. We also wanted this shoot to have more of a retro feel, something we’ve really been leaning into lately. The goal was pastel, airy, fae-inspired vibes that slowly phase into a darker palette. Our reasoning behind this is, if you think about it, Mother Nature has a great deal of duality to her. We wanted to convey her night and day persona, while showing there can be beauty in both simultaneously.

With that, scroll down to see the photos from our Butterfly Bride Styled Shoot. 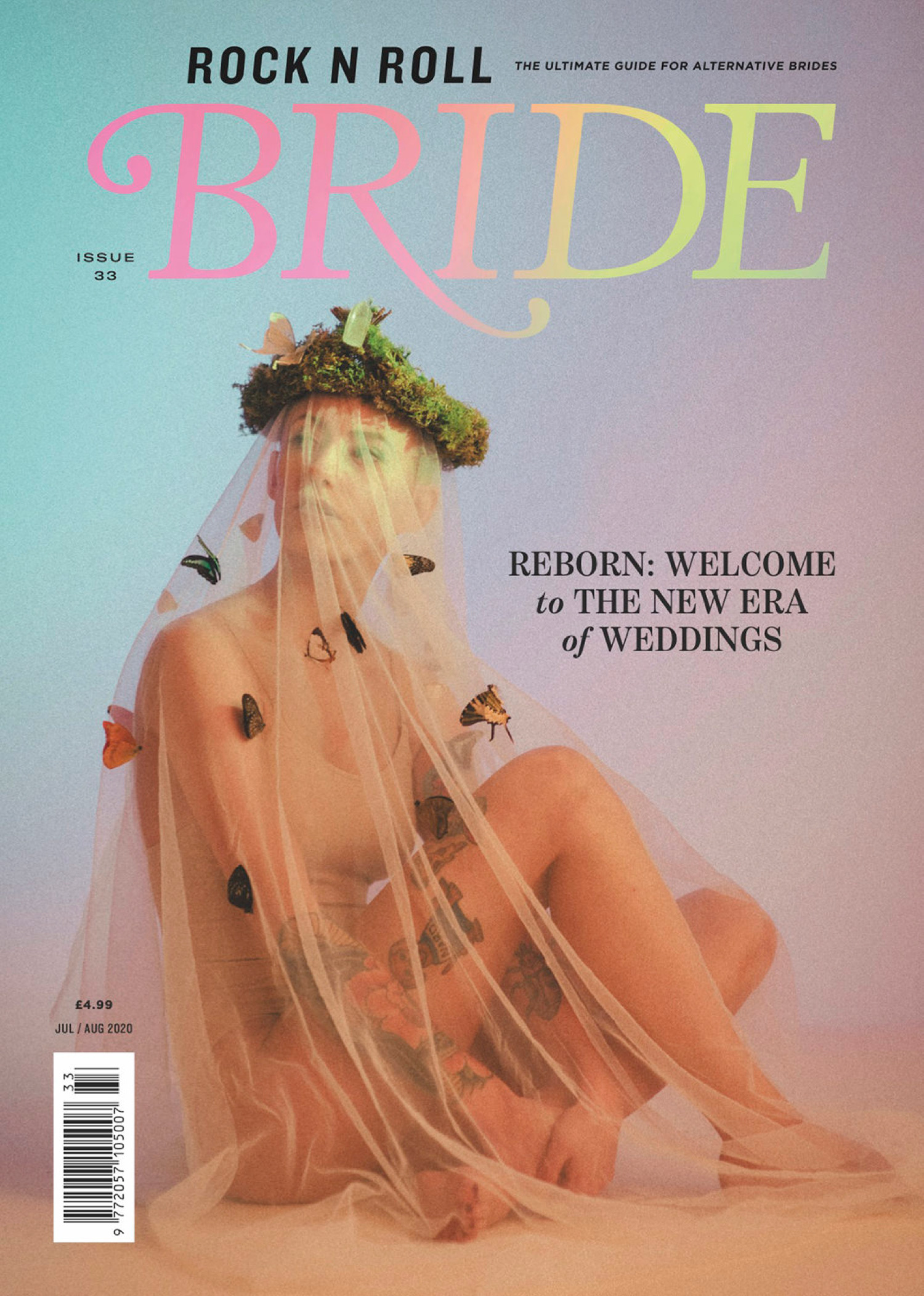